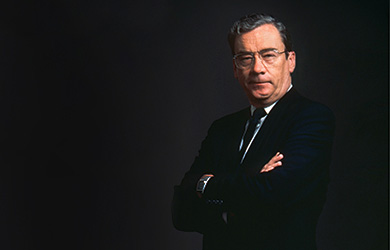 William G. McGowan (1927-1992) was a pioneering entrepreneur and the motivating force behind the success of MCI. During his 24 years as the head—and very public face—of MCI, William McGowan expanded the company from a struggling local radio service to a $9.5 billion telecommunications giant. He was instrumental in the toppling of the Ma Bell monopoly, and thanks to his dogged efforts and successful antitrust litigation, the previously regulated telecommunications industry was transformed into a business open to competition.

A man born of modest means, William McGowan achieved remarkable success. He recognized, though, that with his success came great responsibility and was committed to providing others hope through opportunity. He believed in the power of education, the promise of medical research, and the urgency of community need. He died in 1992 after a six-year battle with heart disease that included two heart attacks and a heart transplant. Soon after William McGowan’s death, the William G. McGowan Charitable Fund was established to provide financial support to organizations that reflect the visions, concerns, and life experiences of its benefactor, and have proven success in changing and improving societal conditions.